When you see a business that has tons of assets, what’s the first thought that comes to mind?

You might probably think that the business is doing well.

I mean, you can’t have that many assets if you don’t have the resources to acquire or purchase them, right?

So it’s not exactly wrong to think that such a business is rich (in money, at least).

However, any experienced investor would know that having tons of assets doesn’t automatically mean that the business is rich and/or well-performing.

A business could borrow money to acquire those assets after all.

So before concluding that a business is “rich”, you may want to look at things other than just its assets.

Particularly, you may also want to look at its liabilities, and consequently, its liquidity.

You’d want to determine if the business has the ability to pay back its short-term liabilities on time.

And that’s basically what liquidity covers.

If a business has at least good liquidity, you would know that it won’t be having a problem paying its debts on time.

It’s important to be punctual with your payments after all.

For one, it avoids unnecessary expenses such as late fees and penalties.

It also preserves the business’s image as a good debtor.

One of the more conservative measures of liquidity is the acid test ratio (a.k.a. quick ratio).

Because of this, it usually shows a lower ratio than an unfiltered liquidity ratio.

In exchange, the business gets a more conservative measure of its liquidity.

What is The Acid Test Ratio? 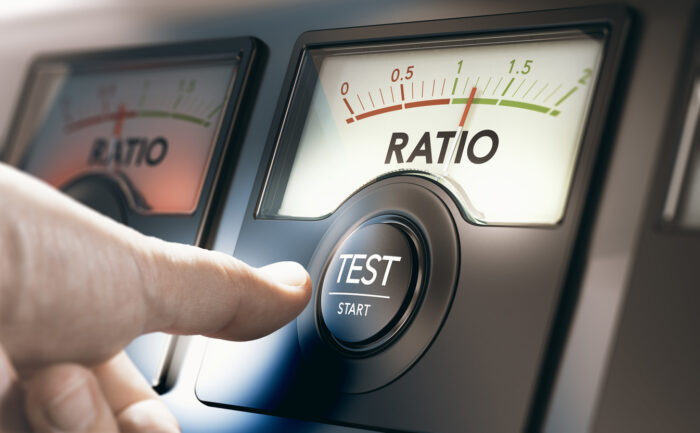 The acid test ratio (a.k.a. quick ratio) is one of the financial ratios that measure a business’s liquidity.

Liquidity refers to a business’s ability to raise cash when it needs it.

It can also refer to a business’s ability to pay its short-term liabilities when they become due.

If a business has at least good liquidity, it won’t have any issues paying its debts when they become due.

Rather than using the total current assets as its numerator, the acid test ratio only uses certain assets, particularly quick assets.

This means that only considers assets that the business can reasonably and reliably convert into cash without jeopardizing their value.

This typically includes assets that the business can convert into cash within 90 days or less.

Of course, cash is a quick asset as it is already cash. Other typical quick assets include accounts receivable and marketable securities.

Here’s what the acid test ratio formula looks like: 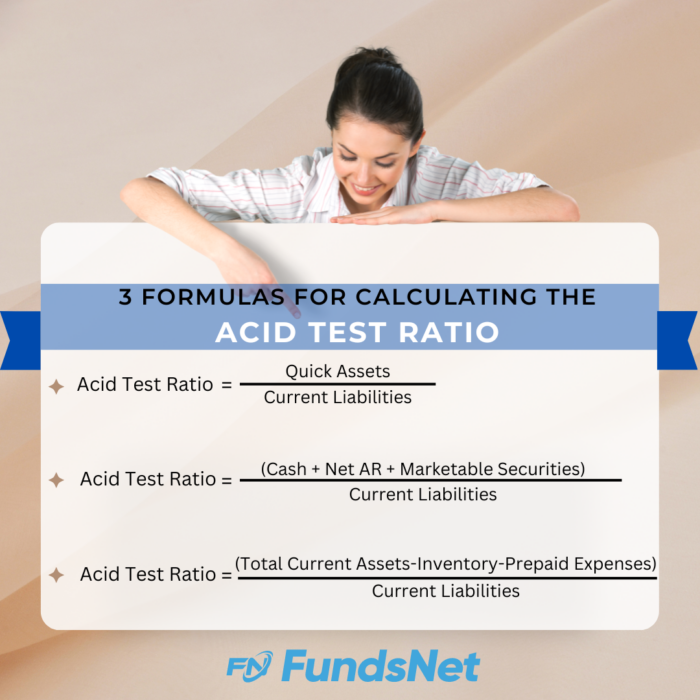 The first variation simply states that quick assets should be divided by the total current liabilities.

On the other hand, the second variation expounds on what assets should be considered quick assets.

This variation is the most commonly used variation among the three presented above.

The third variation used the total current assets figure and deducts assets that are considered to be not “quick” (inventory, prepaid expenses).

This variation is only recommended for use if you cannot gather data regarding the business’s quick assets.

This becomes less effective if the business has other non-quick assets (e.g. other assets).

Components of the Acid Test Ratio

Let’s expound on what assets are considered “quick assets”:

Cash is a business’s most liquid asset. It’s because cash is… is cash!

One of a business’s most important resources, cash is versatile.

A business can use it to pay for its operating expenses such as rent, salaries and wages, maintenance expenses, etc.

It can also be used to pay off the business’s debts.

Most creditors only take cash as payment (rarely will you find a creditor that accepts non-cash assets as a form of payment).

Cash includes currencies that the business has on hand (cash on hand, petty cash fund), as well as its bank accounts (cash in bank).

It may also include foreign currency that’s been translated into the business’s main currency.

When a business makes a sale but doesn’t immediately receive cash, it creates an asset known as the accounts receivable.

It represents the amount that customers owe to the business.

The credit term of accounts receivable will depend on the business’s credit policy.

Most businesses have a term of 30 to 90 days for their credit sales.

However, some may go beyond that.

In order to qualify as a quick asset, accounts receivable should be collectible within 90 days or less.

If a receivable cannot be expected to be collected within such time, it should not be considered a quick asset.

Additionally, any amount that the business expects to be uncollectible should be deducted from the total accounts receivable.

This is because the acid test ratio, and liquidity ratios in general want to reflect the cash that the business can have.

Uncollectible accounts don’t represent cash that a business may have in the future.

Marketable securities are financial instruments that have short maturity periods.

This means that they can be converted to cash within a year or less.

However, to qualify as a quick asset, the marketable security should be readily convertible to cash within 90 days or less.

In addition, there should be no significant decrease in value when converting into cash.

In most cases, inventory is expected to take time to be converted into cash.

By the time the business is able to liquidate its inventory, its short-term debts might already be long overdue.

Hence, while inventory is a current asset, it doesn’t usually count as a quick asset.

If a business can reasonably and confidently convert its inventory within 90 days or less, there may be an argument as to whether inventory is a quick asset or not.

In most cases, prepaid expenses aren’t convertible to cash. Rather, the business just consumes them over time.

And they only pay off the expenses or debts that they prepaid for.

They cannot pay for other short-term liabilities. Thus, they don’t as quick assets.

To test our understanding of the acid test ratio, let’s have a simple example.

The following are data regarding a business’s current assets and assets liabilities:

Next, let’s proceed with the calculation of the acid test ratio:

As per our calculation, the business has an acid test ratio of 2.

This means that for every $1 of short-term liabilities, it has $2 in quick assets.