Chairman vs CEOWhat's the Difference & What you need to know!

The structure of a corporation or business is something that’s very influential in determining whether this company is successful or not.

The corporate structure has a CEO as the highest ranking manager in a business, but the CEO still has to answer to the board of directors which is led by the Chairman.

Let’s take a look at the corporate structure as it pertains to the roles of Chairman vs CEO.

These two roles aren’t in competition, but they can have a somewhat adversarial relationship in the sense that a CEO has a vision that they hope to execute, but the board of directors – by representing the shareholders – may not always share that same vision.

The CEO, despite being very well-compensated and wielding a lot of power, still has people above them who can, for instance, vote to replace the CEO and hire someone new.

The CEO might have to try to tow the line at times, and understanding how these structures and hierarchies intermingle is useful in navigating the world of corporate and office politics.

What Is a Chairman In a Corporation? 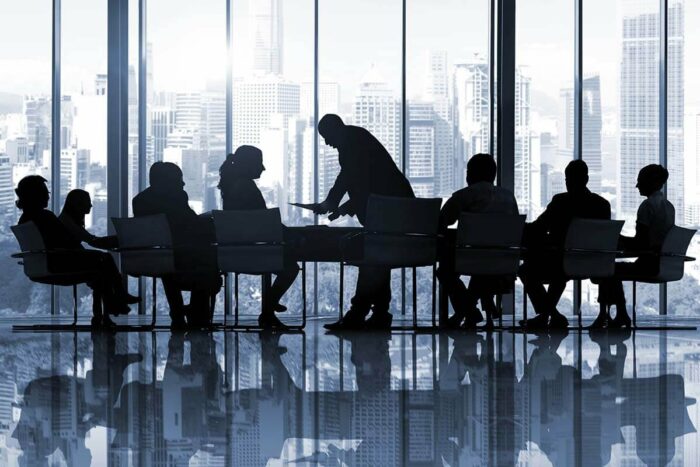 The Chairman, or Chairperson, is the highest ranking member of a company’s board of directors. The Chairman and the other board members are elected by the shareholders when it’s a publicly traded company.

Every publicly traded company is required to have a board of directors with a Chairman, but some private companies will have a board, too.

The Chairman and their board are there to oversee the managers of the company, with the CEO being the top-ranked manager and the c-suite executives being right up there, too.

Directors can come from within the company or they can be nominated by an outsider or a group of shareholders.

Some major stock exchanges will only list companies if their board of directors has a majority of their seats filled by independent directors. Since the role of the board is to look out for shareholders, this helps to prevent any shenanigans where the board could work against the interest of the owners and shareholders of the company.

The Chainman and the board are there to set various policies at the company, to oversee things, and to make a variety of decisions including when it comes to things such as:

What Is a CEO?

The CEO is the highest ranking executive that works for a company. The CEO’s job is to determine the best strategy for the company moving forward based on a number of different factors. In choosing a strategy, the CEO works with the other executives and higher-ranking managers to come up with a plan on how to achieve the goals of the business.

The CEO also acts as a public liaison of sorts. If you’ve ever seen a corporate sponsor cutting the red tape for a charity or something along those lines, it’s not rare for the person making an appearance to be the CEO.

The CEO is under a lot of pressure since the success or failure of the business (at least in the eyes of shareholders, the public, and other employees) falls squarely on the shoulders of the CEO.

As a startup grows and grows and as a small business starts to spread its wings, there’s a time where the founder or founders will be faced with the decision to bring on additional help like a CEO.

This can be a tough decision since owners and founders always have a tough time handing over some control over the company they’ve built, but the general idea is that a founder’s skill set isn’t necessarily the same skill set as it takes to lead a company as a CEO.

The CEO has to inspire employees, take on a strong leadership role, delegate tasks to managers, and get everyone to buy-in to their vision. It’s not easy to lead a large group of people, and unless the founder possesses these exact skills, then bringing in a CEO can be very beneficial.

Can a CEO Be A Chairman?

It’s common for the CEO of a company to sit on the board of directors, since most boards will have at least one person from within the company sitting on the board. This is something that can be delicate, especially if there are multiple company insiders on the board, since it’s an environment that can be very prone to conflicts of interest.

Some companies will have a CEO who does double duty and also acts as the chairman, but it’s a tall order. The role of CEO is a full-time position and a vital role that can take up most of someone’s time, and the chairman position is also a full-time role so to find someone who can overlap can lead to both positions being under-served.

What’s The Difference Between a Chairman VS Ceo?

The CEO reports to the board of directors and is accountable to them, therefore the chairman represents the group that is there to oversee the CEO along with overseeing the rest of the executives and senior managers in an organization.

At times, there can be contention between the chairman vs CEO in a company because the CEO’s vision might not always line up with what the shareholders are demanding, and the chairman’s job is to try to reconcile that.

Chairman VS CEO: An Essential Component of Business

There’s a reason that a CEO and a chairman are such prolific members of the corporate structure. Their jobs are very important and challenging. A bad CEO can tank a company, and a bad Chairman won’t be able to lead an effective board, which can also lead to very bad outcomes for a business.

Having these two positions filled and working together with common goals can be very powerful, even if their interests don’t always perfectly align. At the end of the day, everyone should want to see the company succeed, they just might have different ideas on how to go about making that happen.

That’s why we have executives, owners, and boards who all have different types of power and influence over having their ideas heard in a business. Understanding the dynamic of the Chairman vs CEO and how they interact with the rest of the company helps to make everything clearer.