Pareto efficiency, also known as Pareto optimality, refers to a situation in which no individual can be made better off by re-allocating resources without making another worse off.

Pareto efficiency, named after Vilfredo Pareto, an Italian economist, indicates that resources are allocated with the greatest possible economic efficiency without regard for fairness or social well-being.

Pareto efficiency has been widely used in microeconomic theory and has acted as a basis for welfare economics.

When an economy is at Pareto efficiency, any redistribution of resources will not create a net positive effect without creating an equivalent negative effect. 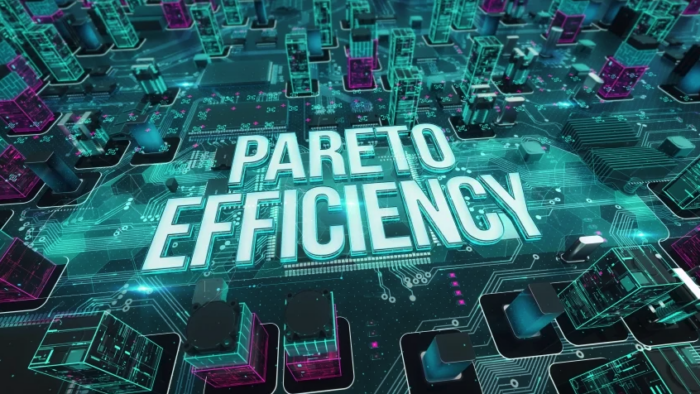 The concept of Pareto efficiency refers to a state in which resources are allocated to their maximum efficient capacity.

This means that resources cannot be allocated to make one party better off without harming another party.

If a change can bring an economy closer to this state, i.e., make one party better off without having an inverse effect on others, this is called a Pareto improvement.

A Pareto improvement can occur in any economy that is not currently at a state of Pareto efficiency.

According to this theory, these changes can be made and continue to improve the efficiency of resource allocation until the economy reaches Pareto efficiency and no more improvements can be made.

At this point, no more changes in resource allocation to improve one party’s welfare will be possible without harming another party.

The easiest way to gain an understanding of Pareto efficiency is to consider how it works in practice.

Here are a few examples of Pareto efficiency.

Consider a situation in which three friends are celebrating a birthday with cake.

Persons A and B both want as much cake as possible, but Person C prefers pie and does not care if he has any cake at all.

So, consider three possible ways in which the cake could be allocated and whether it is Pareto efficient.

In order to determine if a situation is Pareto efficient, it is necessary to consider whether or not any changes to benefit one party can be made without harming another. In this case, persons A and B want the most cake they can get, while person C does not care if he gets any at all.

As a result, allocations 1 and 3 are Pareto efficient. In option two, person B does not care if they have any cake; thus, any amount they receive could be allocated more efficiently by distributing it to persons A and B.

Option 1 illustrates a key principle of Pareto efficiency well, specifically that it does not consider fairness, only efficiency.

In this case, it would be impossible to give any cake to person B without taking some from person A.

Thus the allocation cannot be made any more efficient.

This building project will have a major effect on the local economy, including:

In total, we can see that building the new train station will result in a net benefit of $20 billion.

However, this situation is not Pareto efficient because some individuals will lose out.

One way that this situation could become Pareto efficient is if the local businesses and/or the company which owns the future train station were to compensate the nearby residents for the inconvenience.

In this way, the businesses could benefit without anyone losing out, thus achieving Pareto efficiency.

However, in practice determining who may lose out from a major project and how they can be compensated is often much more difficult.

Pareto Efficiency in the Real World

Pareto efficiency s a valuable theory for examining theoretical situations in economics; however, in practice, it is difficult to apply.

Determining who will lose out in a given situation and how to prevent this is often virtually impossible, and in addition, the lack of any consideration of social welfare often would make decisions under this theory undesirable to the public as well.

This is why economists have developed other methods for judging economic efficiency, which often offer greater utility and thus has received significant use.

One of the foremost of these is Kaldor-Hicks efficiency which judges a change to be efficient when the benefits outweigh the costs.

This is often much easier to attain, particularly in public policy, than in a situation in which no one loses.

Though often impractical for application in real-world economic scenarios, the concept of Pareto improvements has seen wide use in scientific and business purposes.

In business, Pareto improvements can be used as a tool to improve the efficiency of resource allocation decisions.

In a free market, an inefficient allocation of resources is referred to as a market failure.

A market failure indicates that resources have not been allocated to full efficiency, and therefore Pareto improvements can be made in order to achieve Pareto efficiency.

A common example of this is demerit goods such as tobacco products which can lead to external costs for non-smokers as well as costs to the smokers themselves.

One way to address this is an increase in taxes for tobacco products which can deter potential smokers due to the increased price and the funds which can be used to compensate for the harms caused by smoking.

Pareto efficiency refers to a situation in which resources are allocated at their maximum efficiency, which means that no improvements are possible without causing equivalent harm.

However, in the real world, no economy is at Pareto efficiency; regardless, the concept remains a valuable theoretical tool for examining the efficiency of changes and guiding decision-making.