Net debt is a liquidity metric that measures a business’s ability to pay all of its debts with its most liquid assets if the debts were to be due today.

It pits the business’s most liquid assets (cash and cash equivalents) against its total liabilities (short-term debts and long-term debts).

If there is still excess debt after the business had exhausted all of its cash and cash equivalents to pay off debts, then that excess debt is what we refer to as Net Debt. 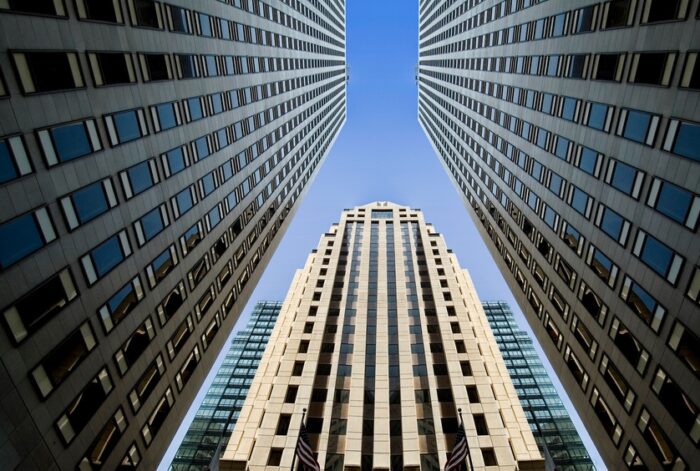 How to compute Net Debt?

Computing can be simple if all the needed data are available.

All of it can be found on a business’s financial statements, particularly the balance sheet.

So if a business maintains a balance sheet, then computing net debt will be much easier.

The formula for computing net debt is as follows:

Short-term Debt refers to debts or any other liabilities that are due within a year. In a balance sheet, these are the line items that you’ll find under the current liabilities section. Some examples of short-term debt include the current portion of long-term debt, accounts payable, accrued expenses (accrued rent, accrued utilities, etc.), salaries and wages payable, and income tax payable.

Long-term Debt refers to debts or any other liabilities that are not due within a year. In a balance sheet, these are the line items that you’ll find under the non-current liabilities section. Some examples of long-term debt include long-term loans, notes payable, deferred tax payments, and convertible bonds.

Cash and Cash Equivalents refer to the most liquid assets of a business: cash or any asset that is as good as cash. Some examples of cash equivalents include treasury bills, money market funds, certificates of deposit, cash management pools, and short-term government bonds.

Some businesses include marketable securities in the computation of net debt.

Marketable securities can be considered as cash equivalents if they are liquid enough (can be converted to cash within 90 days).

Let’s try using the above formula to compute the net debt of Colgate-Palmolive Company.

Below is an excerpt of Colgate-Palmolive Company’s balance sheet for the years 2018 and 2017. 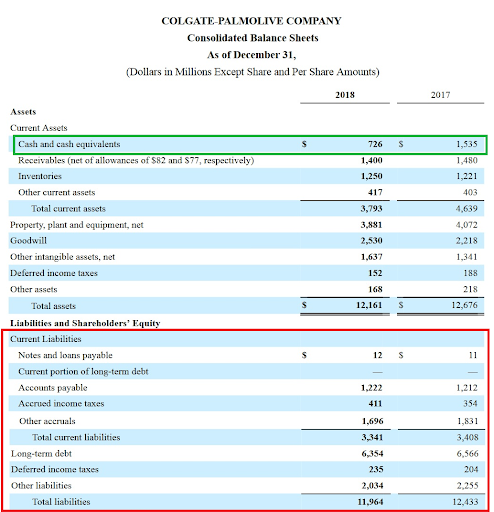 First, we need to identify the short-term debts and long-term debts of Colgate-Palmolive Company. Under the current liabilities section, we have the following line items:

We can get the short-term debt figure by adding these line items together.

Same as what we did for short-term debt, we will add these line items together to arrive at our long-term debt figure.

Since Colgate-Palmolive Company’s balance sheet already presents us with the figures for cash and cash equivalents (highlighted by the green box in the illustration above), we can now compute the net debt for 2018 and 2017.

These figures may seem big… because they really are!

If we compare them to the total assets of each year, you might wonder how the company is still existing.

But the Colgate-Palmolive Company still exists to this day.

So while net debt is an important figure to look at when assessing the financial health of a business, it shouldn’t be looked at in a vacuum. 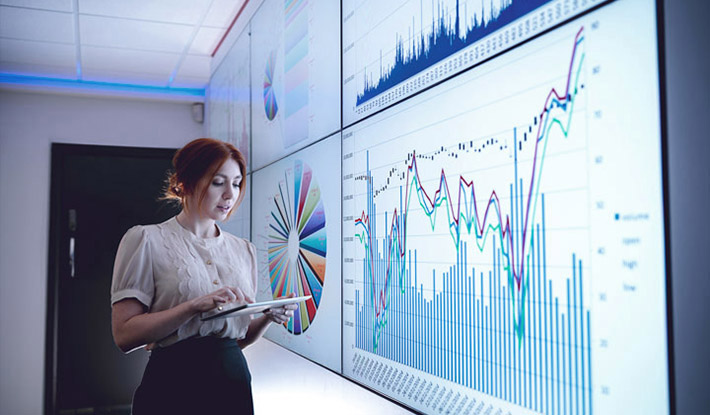 Besides, it rarely happens that long-term debts become suddenly due.

However, if a majority of a business’s debts are short-term, and the net-debt figure is high, then that may be a sign that the business is struggling with liquidity.

That’s one of the purposes of computing for a business’s net debt – to give us an idea of the business’s liquidity.

If a business is struggling to keep up even with just its short-term debts, then it might be a good idea to shy away from adding more debt.

If a business struggles with its liquidity for an extended period, it will eventually have solvency issues.

Of course, the computation for net debt not only considers a business’s short-term debts but also its long-term debts.

Another purpose of net debt is to know whether the business has the capacity to take in additional debt.

Not only is this useful for the owner/s and management, but it also helps creditors in knowing whether or not they’ll be getting their money back if they lend their money to the business.

It’s also helpful for investors as having the capacity to take in more debt is an indicator of financial health, which could make the business an attractive investment.

Let’s go back to long-term debts.

While long-term debts are not payable immediately, it’s still important to take them into consideration.

After the passage of time, long-term debts will become short-term debt after all.

If a business is already struggling or just barely managing its short-term debts, then it probably would have trouble dealing with long-term debts too.

However, not all businesses are built the same. Some businesses within certain industries are expected to have large debts.

For example, oil companies need to invest in a lot of capital assets, which would lead to them racking up large amounts of debt.

In contrast, some businesses aren’t as much capital-intensive.

For example, businesses that purely offer services such as accounting firms don’t need too many capital assets so they’re expected to not have many debts, hence will more likely have low or even negative net debt.

To compliment our Colgate-Palmolive Company example earlier, let’s have a look at a business that is in a different industry: Facebook Inc. 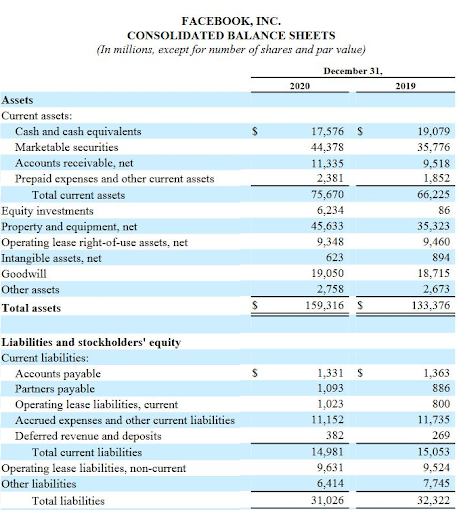 And here are additional notes regarding marketable securities:

We will assume that the marketable securities that are due in one year are can be converted within 90 days, and so we will include them in the computation of net debt. 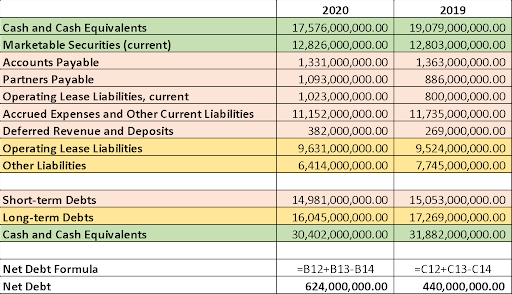 Color-coded for ease of use

It may seem high, but if we compare it to Facebook Inc.’s total assets, it doesn’t even come close – a stark contrast to Colgate-Palmolive Company’s net debt situation.

Do remember though that they’re from different industries, so we cannot just say that Colgate-Palmolive is doing worse just because Facebook Inc. had less net debt.

A business will have negative net debt if its liquid assets are more than enough to settle its debts.

In general, having negative debt is a sign of great financial health.

It means that the business has more liquid assets than debts.

In the event that all of its debts become due immediately, then it will have no trouble paying for it all.

And if it still has more even after settling all debts, then it will have the capacity to deal with unexpected financial problems.

However, having too much negative debt isn’t always a good sign.

Having too much liquidity could be a sign of inefficiency.

If a business is too risk-averse to the point that it won’t invest its cash in capital assets, then its growth might be stunted.

For example, an oil company that does not invest in additional machinery and equipment will eventually hit a wall and will stay stuck there unless they finally take the plunge and buy those needed capital assets – and they might need to avail of debt to do that. 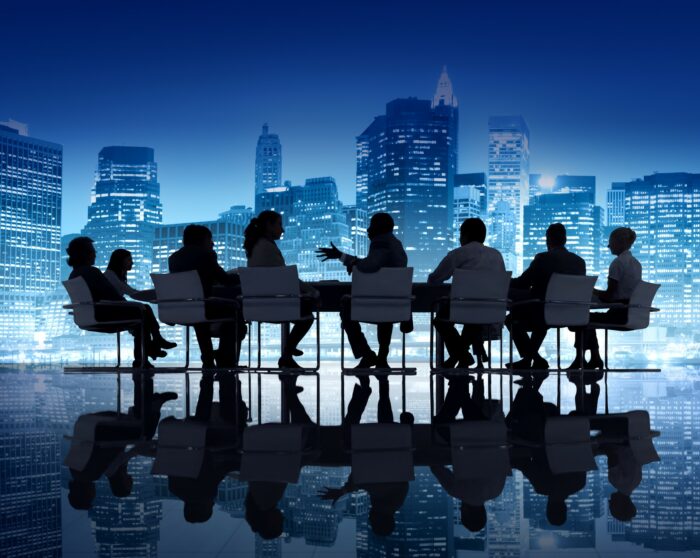 As already mentioned before, the net debt figure should not be looked at in a vacuum.

It is more helpful if used in conjunction with other ratios such as liquidity ratios (current ratio, quick ratio, cash ratio) and leverage ratios (debt-to-assets ratio, debt-to-equity ratio). While net debt informs us of a business’s capacity to pay all of its debts with its most liquid assets, it only tells us that.

It does not tell us the due dates of the debts, or if the business’s earnings are accounted for.

That’s why it should be used in conjunction with other financial ratios.

Unlike other ratios, net debt is presented as a currency amount so it might be tricky to compare a business with another business that is not of the same size even if they’re within the same industry.

For that, we might need to seek the help of another financial ratio (Net Debt to EBTIDA) ratio.

Same with most ratios, a business’s net debt can only be compared to another business’s if they’re within the same industry.

In some industries, it is normal to have high net debt, while in others it isn’t.

The Net Debt to EBITDA ratio measures a company’s capacity to pay off its debts with its liquid assets along with its earnings.

It is computed by dividing net debt over EBITDA (earnings before interest, taxes, depreciation, and amortization).

Put into formula form, it would look like this:

In essence, it informs us of how long it would take for the business to pay off all of its debt with its earnings, provided that it stays at the same operating level.

For example, if a business has a net debt to EBITDA ratio of 3, then that means that it will take 3 years for the company to pay off its debts.

Just like with net debt itself, the Net Debt to EBITDA ratio is useful in assessing a business’s ability to pay off debts and capacity to take in more debts.

A high Net Debt to EBITDA ratio might signify that the business should slow down in seeking more debt.

It is best used if compared previous periods’ Net Debt to EBITDA ratio to see if things have improved or not.

It should also be compared with industry standards to assess whether the business is doing okay with its debts.