What is the Industry Life Cycle?

The industry life cycle refers to the four distinct phases through which industry or business progresses.

The life cycle of industry represents how it is born, grows, becomes mature, and ultimately declines.

All industries will pass through the life cycle though the rate at which it proceeds may vary.

Understanding the stage of the industry life cycle at which a company currently operates is key to making optimal strategic plans and decisions for company management as well as for smart investment decisions by potential investors.

The four stages of the industry life cycle are introduction, growth, maturity, and decline.

Industry life cycles refer to the progression of a particular industry or business from its introduction to its decline.

Though there are no universally recognized stages, the most commonly accepted are introduction, growth, maturity, and decline.

These stages will occur for all industries though the rate at which they occur varies considerably, with some progressing through all of the stages in only months and some lasting in a particular stage for years.

It is also important to keep in mind that the model for industry life cycles is most accurate when it is applied to manufacturing.

However, though service industries may function differently, it is still relevant.

In some cases, companies and industries can extend their industry life cycle through research and discovering new uses for their product.

In many cases, strategic planning can result in companies in the same industry finding themselves in different stages of the industry life cycle.

The lifecycle of an industry is charted by the growth and decline in sales over time.

Generally, sales slowly grow during the introduction phase, accelerate rapidly during the growth stage, level out at the maturity stage, and then gradually drop during the decline stage. 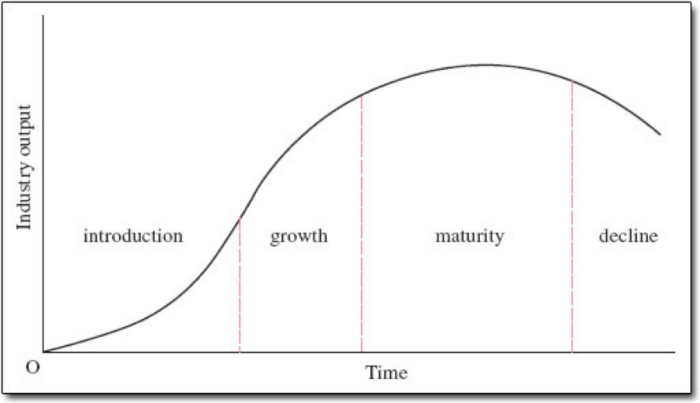 There are four distinct stages to the industry life cycle which are generally recognized.

These are the stages of introduction, growth, maturity, and decline. Here is an in-depth look at each and what marks the stage in the life cycle.

At the introduction stage, a new product or service is developed and being introduced to the market.

During this time, customers are unfamiliar with the product, and consequently, demand for the product is limited.

Potential customers will need to learn more about the product, and channels of distribution will need to be developed to boost sales.

Developers of the new product will often begin creating new businesses to produce and distribute the product, and profitability will generally be low or even negative at this stage due to the expenses companies will incur in developing and marketing the new product.

This is coupled with a lack of complementary products, which will often be introduced later to boost revenue.

Sales growth will proceed slowly during this stage as the industry is born.

Once growth begins to rise rapidly, the industry is said to have entered the growth stage of its life cycle.

During the growth stage, the industry has come to the attention of a larger number of consumers, and demand begins to rapidly rise, as does revenue.

Significant participants in the industry will generally begin to stand out and compete for a larger share of the market.

Large companies in adjacent industries may enter the new market by acquiring existing participants or developing a product internally.

Though short-term profits are typically not the highest priority at this stage, as most participants will remain focused on investing capital in R&D and marketing to increase their market segment, it is at this stage that companies will often begin to break even and potentially generate positive cash flows.

This boost in revenues is further benefited by the introduction of complementary products, which offer greater opportunity for sales and related profits as well as offer consumers greater value in purchasing both the product and all of its complements.

As sales of the product grow, the economies of scale and growing expertise allow the product price to fall, which in turn will further increase demand.

Growth during this stage occurs rapidly, and companies will often expand geographically.

The length of time at which an industry remains in this stage varies considerably based on the industry.

In some industries, such as particular toy markets, the growth stage may end in weeks or months.

However, products that can be upgraded or grow in utility may remain in this stage for years as greater value is added to the product with time.

Once production meets demand and growth slows, the industry is said to have entered the maturity stage.

Depending upon the analyst, some identify a distinct “shakeout” stage apart from the maturity stage.

However, whether or not it is considered to be a part of it at the start of every maturity stage, a shakeout period will occur.

During this period, some firms will be incapable of keeping up with the overall industry and will be eliminated.

Other companies will merge with or be acquired by competitors as the industry consolidates.

As the industry becomes mature, the majority of companies will be well-established, and the barriers to entry will grow.

The remaining companies will typically moderate their level of competition to maintain their own profitability and apply strategies intended to prevent new entrants into the market.

Companies often, in order to maintain their market share and prevent late entrants in the industry, will invest in marketing and differentiating their own offerings from others.

Companies may attempt to compete by raising their quality to compete against low-cost alternatives or attempt to reduce their cost and prices to increase sales volume.

Companies that survive to this stage will generally be larger and fewer in number.

Those that remain may have high enough profits to issue dividends. Innovations may still occur however they are generally less significant than during the introduction and growth stages.

It is virtually inevitable for any industry that a decline will occur.

Whether it is prompted by a lack of innovation compared to competing industries, innovation resulting in the industry becoming obsolete, or other factors as sales slow and begin to decline, the industry will cease to be able to support growth.

End markets will respond by evolving to support other products or services, and revenues in the industry will drop.

This will result in a larger shakeout as many companies leave the industry during this stage.

The economies of scale can help to improve profit margins, and product improvements or innovation can help to delay the decline stage; however, this will generally simply prolong the same stage.

Often the decline stage will mark the end of viability for the industry, and companies will need to move into adjacent industries or new markets in order to remain profitable.

Investors and analysts use the industry life cycle as a way to measure the value and prospects of a particular firm’s stock.

Depending upon the stage that a company is in, its prospects for future growth may be considerably different.

A company that is in the growth stage of an industry may have to face significant competition as it keeps prices low and invests all revenue back into itself to retain and expand its share of the rapidly expanding market. However, the potential for growth at this stage is significant.

A company that is in the mature stage generally is far more secure as competition is minimal, and new entrants are few, but the potential for growth at this stage in a mature industry is limited.

In order to grow, such a company would likely need to seek out new markets in which to expand.

Incorporating industry life cycle analysis such as this can greatly boost an investor’s understanding of a particular stock’s strengths and weaknesses.

Example of the Industry Life Cycle

The gasoline automobile industry has existed for a significant period, and during this time, it has grown and seen significant innovation.

However, the industry for gasoline-powered cars is seeing some threats as electric cars have grown and begun to displace fossil fuel-powered vehicles.