Generally Accepted Accounting Principles or GAAP, are a set of standards, principles, and procedures issued by the Financial Accounting Standards Board (FASB).

All public companies in the United States are required to utilize GAAP when they create their public financial statements. 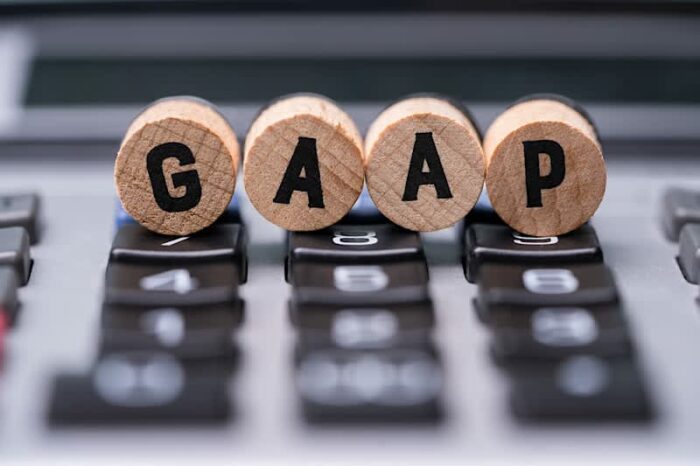 The 10 Principles of GAAP

GAAP provides 10 general concepts that both provide its primary goals and help users to make decisions on how to follow its guidelines.

This makes it easy for external users to understand a GAAP-compliant entity’s financial statements and compare them with any other GAAP-compliant statements without fear of inconsistency or misleading reporting methods.

This concept is critical in allowing investors and companies to make sound decisions.

There are three components that makeup GAAP and prevent misleading and confusing accounting practices.

These include GAAP’s 10 accounting principles, the FASB’s rules and standards, and generally accepted industry practices.

By using these components, accountants can produce clear and honest reports that accurately portray a company’s standing for all internal and external users.

These three components are:

These are the ten basic principles and guidelines which provide a foundation for accounting.

These principles have evolved over many years and provide a basis for fair reporting based on best practices.

This compendium collects thousands of standards that have been created by the FASB, its predecessor, the Accounting Principles Board (ACB), and other standard setters.

Not all entities are required to follow the precise model outlined by GAAP.

Instead, some companies use distinct practices that reflect the needs of their own industry.

An example of this would be banks that use highly distinct accounting methods from a manufacturer.

The History of GAAP

GAAP originated primarily as a response to the 1929 Stock Market Crash, which marked the beginning of the Great Depression.

It was widely believed that this was at least in part caused by misleading and dishonest financial reporting.

At this time, there was no organization creating formal accounting standards.

In response, the government began to encourage private organizations to create such standards to allow for accurate and universal reporting.

This led to the creation of GAAP, and over time multiple organizations have been responsible for setting these standards.

Since July 1st, 1973, this responsibility has belonged to the Financial Accounting Standards Board who continuously works to improve and update the GAAP.

Over time, the use of GAAP for accounting and financial reporting has become widespread and required for all public companies.

Additionally, every state government uses GAAP in preparing their financial reports, and approximately half of these states, in turn, require county and local governments to do the same.

Who Made the Generally Accepted Accounting Principles

Despite the fact that the United States government mandates the use of GAAP by public companies, it actually plays no role in creating these principles.

GAAP is actually developed by multiple independent standard-setting boards, which bear the responsibility of ensuring these principles are maintained and updated as necessary.

One recent example of this is the changes made by the Governmental Accounting Standards Board to allow governments to report the expenses caused by the COVID-19 pandemic.

In order to ensure that these standards-setting boards act effectively and with integrity, they are supervised by the Financial Accounting Foundation.

The FAF oversees the administration and finances of these boards and appoints their members.

The FAF also operates two advisory councils that consult with the standards-setting boards on important issues.

The FASB was formed in 1973 to take over the maintenance and oversight of GAAP.

This organization is composed of a board of seven full-time members, with one serving as the chairman of the board and more than 60 staff members.

The FASB maintains the Accounting Standards Codification ASC, which holds all of the current GAAP standards.

The FASB is supported by the Financial Accounting Standards Advisory Council (FASAC), which consults with the board on important issues. 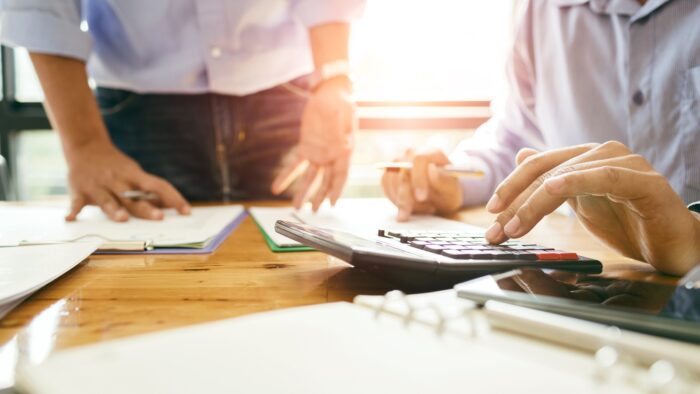 In 1984, the GASB was formed and given the task of producing GAAP for use by local and state government entities.

A lot of people rely on the financial statements issued by the government, and the GASB emphasizes transparency and equity.

The public can review the GASB’s activities.

There are a lot of companies that think that GAAP fails to accurately portray the success of their company.

These businesses will sometimes include non-GAAP earnings along with earnings that were calculated using GAAP methods.

The table below shows Apple’s net income, operating expenses, and earnings per share both using GAAP and non- GAAP standards from the fourth quarter of 2004 and 2005.

It is a good example of how companies use non-GAAP reporting to change how successful their company looks. GAAP earnings, operating expenses, and earnings per share are recorded in the first column.

For 2004, net income is the same when using GAAP and non-GAAP standards.

But,  operating expenses are lower, and earnings per share are higher when using non-GAPP standards.

For 2005, net income and earnings per share are higher, and operating expenses are lower when using non-GAAP standards. 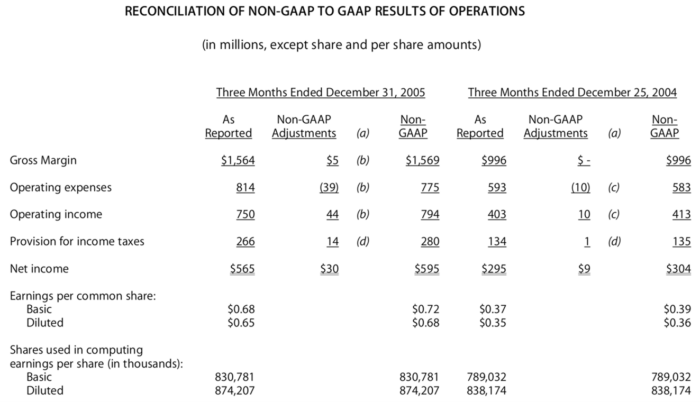 If a company has a one-time transaction that is unusual, a non- GAAP report may do a better job of reporting it.

However, some businesses list repeated earnings as though they were one-time events. Non-GAAP figures may seem to be clear, but they can be confusing for investors and even regulators.

There are a lot of companies that are in support of non-GAAP reporting because they feel it gives them a more in-depth view of their financial performance.

But, this is not always the case. Non-GAAP numbers also include pro forma figures; these fail to include any one-time transactions.

This allows businesses to make use of this information to show figures that predict their business’s future performance.

GAAP does try to avoid occurrences of inaccurate reporting, but GAAP does not cover everything.

Companies sometimes have problems that are not covered by GAAP.

This is often dependent on the industry they are in, their location, the size of their business, and whether they are a global company.

GAAP sometimes seems like it doesn’t make much of an effort to adapt to different types of industries.

GAAP is not very easy for local or state governments to implement because their environment is different than that of most companies.

However, GAAP hierarchy proposals may do a better job of adapting to the needs of local and state governments.

Small businesses can have trouble using GAAP as well. GAAP standards can be complicated for the accounting needs of small businesses.

Yet, it can be expensive to hire people to prepare GAAP definition reports.

Therefore, in an attempt to make it easier for these kinds of businesses, GAAP has been working with the Private Company Council to include alternatives and exceptions for private companies in GAAP.

It can take months to years for GAAP policy boards to finalize a new standard due to the thorough process they have for setting standards.

The long amount of time companies have to wait for new standards can make complying with GAAP difficult because the pending standards may end up affecting financial reports. 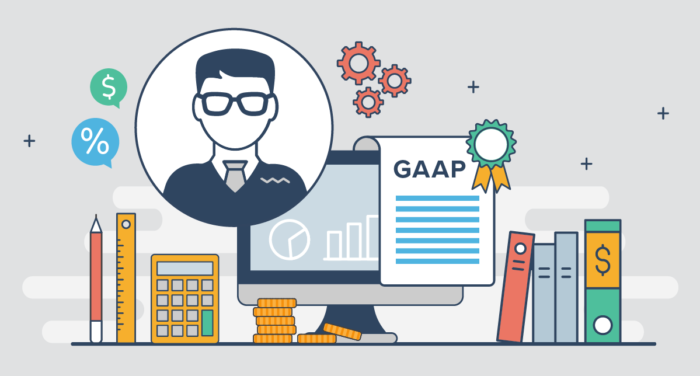 GAAP is not used by other countries as an International Accounting standard, which can make accounting more difficult as more businesses operate globally.

Outside of the United States, the International Financial Reporting Standards are the most frequently used set of accounting standards.

The IFRS are used in Canada, the European Union, Japan, and Australia, as well as many other countries.

What Is the IFRS?

The IFRS was originally known by a different name, the International Accounting Standards Committee (IASC).

This committee was started in 1973, and it issued a set of International Accounting Standards in an effort to produce more consistent accounting methods for use in the European Union.

Then, the IASC was replaced in 2001 by the International Accounting Standards Board (IASB).

After this, the IASB started publishing the IFRS. The IFRS is currently in use in 166 jurisdictions, including the United States.

Although, the United States does not fully conform to IFRS standards.

The United States does not require companies to follow IFRS.

Yet, more than 500 international SEC registrants do observe these standards.

Although, domestic public companies are required to follow GAAP exclusively.

Since the United States does not compel companies to conform to IFRS, global companies sometimes have difficulty when preparing their financial statements.

In 2002, the IASB and FASB formed the Norwalk Agreement in an attempt to deal with this problem.

According to the agreement, the two organizations were supposed to combine their accounting standards, but so far, little has been done to fulfill the agreement.

However, the FASB does help to create the IFRS standards

Are there Differences Between U.S. GAAP and IFRS?

Both the FASB and IASB would like to combine their standards since they both have the goal of ensuring accounting integrity.

Although both organizations have a financial reporting framework that attempts to give consistent rules and procedures for accountants to follow, there are clear differences between the two sets of standards.

These two organizations have different priorities.

The IFRS prioritizes general principles that companies are expected to follow.

In contrast, U.S. GAAP provides detailed guidelines along with rules which companies must follow.

Companies following the IFRS standards may interpret the general principles differently, which could then require lengthy explanations of their reasoning.

Along with this major difference, there are a number of other small differences in the standards of these organizations, and we list some of these below.

What are the ten Generally Accepted Accounting Principles?

What is the Purpose of GAAP?

These principles are used by both private and public companies to make sure their documents are presented in an accurate, clear, and consistent way.

GAAP helps ensure that financial reports are clear and comprehensible, allowing both investors and regulators to evaluate the financial standing of a business.

GAAP is important because it ensures that a company’s financial records are consistent, clear, and comparable.

This allows investors to compare the financial records of different companies and make informed investment decisions.

Also, if companies did not follow these rules, the financial reports of different companies could be very different, making it easier to create fraudulent reports.

What is an example of GAAP?

GAAP standards cover a large number of topics in financial accounting, but not everything since it was designed to allow professional judgment.

It does cover financial statement presentation, the financial periods to be included, and how to account for operating expenses among others.

Also, companies that want to obtain credit will need to follow GAAP.