AMT – Alternative Minimum Tax Definition & How Has to Pay this?

To guarantee that certain taxpayers pay at least a minimum amount of their income tax, the Alternative Minimum Tax (AMT) was implemented which puts the taxpayer in the position to comply with various alternative minimum tax guidelines.

One of the guidelines that have to be followed involves the increase in the taxpayers’ income tax liability by putting a cap on their deductions, exclusions, credits, and other forms of tax breaks.

This increase in tax liability is computed by using the rates of 26 percent or 28 percent.

The Individuals Subjected to Pay the Alternative Minimum Tax (AMT)

Naturally, Alternative Minimum Taxpayers are workers who are considered as high earning.

Consequently, they have to compute their income tax twice – one that follows the standard tax guidelines and the other which follows the guidelines under AMT – whichever yields the higher amount is the income tax liability to be paid.

The Computation of the Alternative Minimum Tax (AMT)

To compute for your AMT, the following guidelines are used:

Unfortunately, some of the deductions, exclusions, and credits cannot be utilized under the Alternative Minimum Tax.

Another thing to consider is that under the alternative minimum tax, a variety of business items are cut down from allowable tax deductions.

Consequently, investors will be required to compute for their alternative minimum tax when filing their taxes. 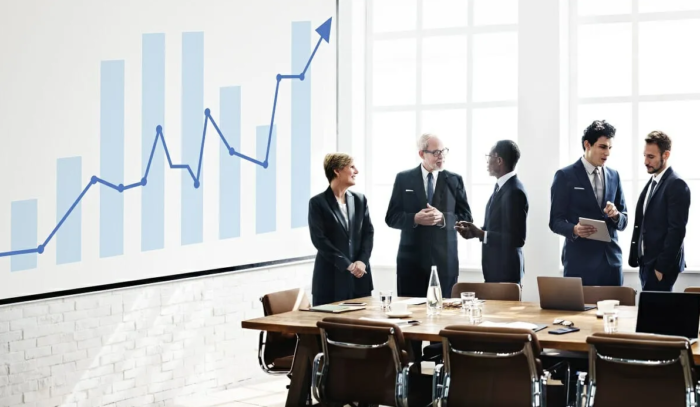 Am I Supposed to Pay Alternative Minimum Income Tax (AMT)?

Upon filing for your tax returns, if the calculations show that you have to pay an alternative minimum income tax, then frankly put, you will have to pay for it.

There is not much that can be done to escape the obligation of paying alternative minimum tax.

Although being aware of your finances and if you could be qualified to pay for alternative minimum tax in the future will help you prepare financially for it.

Seeking advice from a tax expert is very helpful and is the recommended thing to do. In addition to that, the burden of the extra paperwork will not fall into your hands.

Do you still find all of this so overwhelming?

Well today is your day.

There is readily available software out in the market today that does the math for you.

The enactment focuses on specific revenues, just like the capital gains earned through the sale of an asset that has increased in value over a set holding period which also happens to be the enactment’s most preferred income.

Part of the specific revenues focused on are those that are either slightly taxed or not at all under the standard income tax.

This enactment happened as there were about 155 taxpayers earning more than $200,000 who have not paid their respective federal income tax in the year 1966 reported by Treasury Secretary Joseph W. Barr which became a topic of discussion and has caused great distress to the members of Congress considering there was still an ongoing war.

Originally part of the add on tax system, preferred earnings along with capital gains were transferred to the Alternative Minimum Tax structure.

To perform as a taxation structure that is in conjunction with the original add on tax system, the alternative minimum tax was constituted in the year 1979. By 1983, add on tax was later revoked by the Congress.

The Economic Growth and Tax Relief Reconciliation Act was legislated in 2001 which provided temporary alleviation to less than 1 million individuals regarding their Alternative Minimum Tax as they have been subjected to pay both the original minimum tax and the alternative minimum tax yearly during the late 1990s.

Despite that, this law has also considerably lessened the taxpayer’s regular income tax obligation.

At the time being, raising the alternative minimum tax exemption amount was a way to mend the Alternative Minimum Tax as constitutions were frequently made, often at the last minute for the past ten years with projections for this continuing until the next ten years.

Despite the frequent amendments made to stop the Alternative Minimum Tax from increasing alarmingly, these changes did not prepare the taxpayers from what could have happened.

Below is a table that demonstrates the number of taxpayers affected through the years 1970 until 2030. 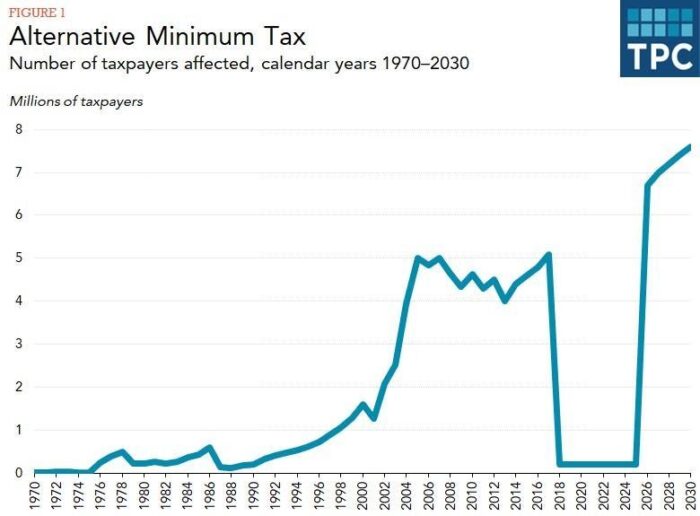 Keep in Mind: This data analysis is inclusive of taxpayers with AMT Liability based on Form 6251, lost credits, and diminished tax deductions for the years 2001-2030 and exclusive of specific taxes from individuals depending on other taxpayers.

As you can see in figure 1, for the last 10 years, individuals affected by the Alternative Minimum Tax have been continuously growing.

This happened due to the fact that the standard income tax was tabulated for inflation whereas Alternative Minimum Tax wasn’t.

Then, there is also the fact that considerable deductions to the regular income tax was legislated by the Congress.

Some of the stipulations which the 2017 Tax Cuts and Job Acts (TCJA) institutionalized that have seriously diminished the effects of the Alternative Minimum Tax are as follows:

Accordingly, Alternative Minimum Taxpayers will fall to 200,000 and shall remain strictly consistent until 2025 as determined by the Tax Policy Center (TPC).

In 2026 and with the exception of rulings from the Congress, the Alternative Minimum Tax shall make a significant return, causing distress to 6.7 million taxpayers which is expected to increase up to 7.6 million in 2030.

By the end of 2025, the AMT stipulations in addition to the other individual income tax legislations in the Tax Cuts and Jobs Act of 2017 (TCJA) shall expire.

To obtain the amount of your Alternative Minimum Tax obligation you must first compute your regular income tax.

The specific Alternative Minimum Tax guidelines regarding the net operating losses standard deduction, depreciation, passive losses, and other preferences like the regular deductions will be essential during 2025 since the personal exemptions and the miscellaneous business deductions were momentarily revoked by the Tax Cuts and Jobs Act which ha alsos put a limit up to $10,000 for the state and local tax deduction.

Keep in Mind: All parameters are tabulated yearly for inflation.

Based on the table, during 2017, single status taxpayers, married couples filing jointly, and heads of households earning $187,800 as well as married couples who are separately filing earning $93,900 are taxed at a 26 percent rate.

The Alternative Minimum Tax was able to generate a constructive tax rate of about 35 percent which is 125 percent rate of 28 percent rate since the exemption amount starts to eliminate at a 25 percent rate (all numbers shown in the table are represented in dollars).

Using the chain weighted consumer price index, the 2020 amounts have been yearly tabulated for inflation.